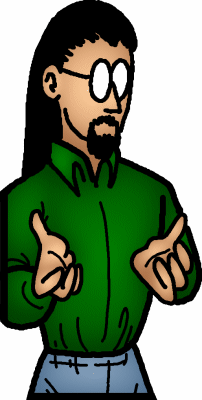 First Appearance: The Brotherhood of the Twisted Pair (November 11, 1999)

Scott is a self-proclaimed Linux zealot with fanatical support for every flavor of Open Source software. He is the last "Zero One" or top leader of the elite secret society of hackers known as the Brotherhood of the Twisted Pair, and treats this duty with solemn reverence. It was under his leadership that both Fooker and Sharon were tested to become members of the Brotherhood. He has been almost fanatical in his search for "the One", the fabled geek Messiah who will lead all of geekdom into a future age of technological enlightenment. His employment at GPF has allowed he and his right-hand-man Tim to can keep close tabs on the couple he believes will one day give birth to "the One".

Scott's constant snooping into Fooker and Sharon's love life eventually gave birth to Sharon's dream world of Harry Barker. There, Scott appears to be a teacher at Hollerith's School of Phreaking and Hacking. As "Scott Sysape", Scripts Master and head of Mitnick Subnet, he most closely resembles Severus Snape from Harry Potter.

As time has progressed, Scott increasingly speaks using a number of anachronisms, embellishing his speech with an almost Shakespearean floweriness. There has been no official explanation for this, nor has any of his colleagues made much of a fuss about it.

It is possible that Scott shares Trish's affinity toward Renaissance fairs; she, Patty, and Dexter ran into him at one such function where he was elaborately dressed in period clothing.