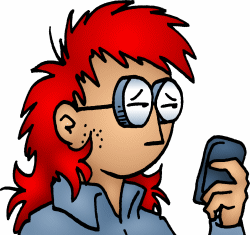 During To Thine Own Self..., when the rescue party secretly entered the Emperor's palace by passing through the sewers into a Grey holding cell, they came face to face with the mysterious "sympathetic insider" who unlocked the cell to let them in. It is Sharon Murphy, or at least her "negaverse" counterpart. Unlike our favorite fiery redhead, this Sharon was timid, shy, and self-deprecating to a fault. She was also a complete and utter technophobe, stating that technology scared her, especially knowing that it was the means by which the Emperor came to power. "Just give me a mop and a bucket. That's about all I'm good at," she stammered. "At least down here no one picks on me."

After the raiding party split and went about their tasks, however, "Nega" Sharon betrayed them to General Barker in hopes of an eventual promotion. Pi and Planck uncovered her treachery, but only just before an explosion rocked the detention block. When the Greys recovered, they discovered that "Nega" Sharon was killed in the blast and apparently "got what she deserved".