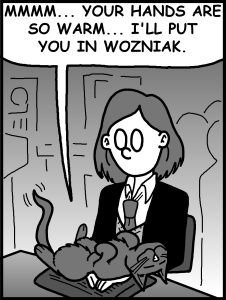 In Sharon's dream world of Harry Barker, the Sorting Cat is a scruffy, darkly-colored feline who resides at Hollerith's School of Phreaking and Hacking. To say that the Sorting Cat is "owned" by the school or by some individual on the faculty would be gross miscalculation; from the Cat's point of view, it owns the school and everything (and everyone) in it, but it rules its kingdom with a very laissez-faire attitude. (Any human who has been owned by a cat would understand this line of reasoning.) The Cat is sapient and has the ability to use human speech; how this has come to pass has yet to be explained. The Cat comes and goes as it pleases and can often be seen wandering the halls of the castle, curling up to nap before a fire, or chasing real or imaginary dust motes in sunbeams. Its gender is currently unknown.

The one place where the Sorting Cat directly interacts with the students and faculty is during the sorting ceremony at the beginning of the year banquet. First year students are sorted into four "subnets" by sitting at a table before a disconnected monitor and keyboard. The Cat lays in whatever fashion it wishes across the student's wrists, eventually declaring that the student in question belongs to a specific subnet. Although the designation appears to completely arbitrary to the uninformed observer (and surely to the first years in question), the Cat's methodologies are very sophisticated and it has never to date been proven to make an incorrect selection. On extremely rare occasions, the Cat apparently takes the student's opinions under consideration; this, however, is a very uncommon exception to the rule and the Cat's final declaration has never been overturned.

The Sorting Cat is the analog of the Sorting Hat from Harry Potter. It is also a parody of the inevitable confluence of circumstance that must occur if a geek owns both a computer and a cat: At some point, without fail (and, quite often, with alarming regularity), said cat must insert itself between the computer user and his or her keyboard, regardless of whether the user's hands are hard at work, and nothing in the known universe can prevent this conjunction from occurring.