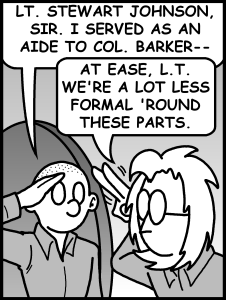 Hair: Uncertain; possibly blond, with either a crew cut or complete shaved

Scylla and Charybdis began with Colonel Lionel Barker musing about his past and future machinations, "confessing" his concerns to a young man in military dress known only as "Johnson". We later learned that Lieutenant Stewart Johnson was Colonel Barker's personal aide, as well as a Physaric "puppet". After the story's climax, Johnson joined the rest of the human "survivors" aboard the Grey research ship commanded by the Great Skaboola. Aware of his unwitting part in the Colonel's plans, as well as his sense of duty and obligation to help others, Johnson quickly volunteered to join the "search for Earth" missions. Before long, he found himself among Fooker, Sharon, and Trudy as the quartet became mysteriously trapped in the universe of D.C. Smythe.

As a U.S. Army officer, Johnson is highly trained, both in combat and leadership skills. Fooker quickly surmises that the Colonel may have been grooming Johnson as a potential U.G.A. agent, although Johnson's reaction to this statement hints that the lieutenant may not be fully aware of the organization yet.

Lieutenant Johnson should not be confused with this "Johnson", one of Moldfinger's assistants, nor should he be associated with Patty Johnson, the GPF Software employee. While all three share the same surname, they are unrelated. (Hey, it's a pretty common name.)