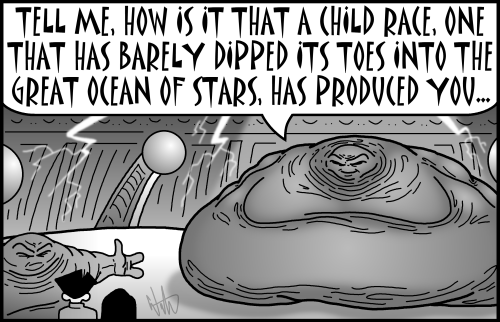 The Supreme Fu is the ultimate high commander of the Greys. While he shares many of the distinguishing features of his race, is also the physically largest Grey known to exist. He is so massive and fat that his limbs are completely useless, making him a permanent fixture on the Grey home World, Municipal Locus Alpha One. An imposing, seemingly impenetrable domed building called the Cynosure is built around him, through which he can see and control all aspects of Grey civilization.

To date, we know very little of the Supreme Fu's personality. It is heavily implied that his is ruthless, merciless, and commands fierce respect from all those who follow him. The mere mention of his name invokes fear and awe among the drones, and even the demanding Grand Protuberance bows his head in reverence while in his presence.

It is implied that the Supreme Fu alone orchestrates policies for the entire empire, delegating a certain amount of control to his generals, the Protuberances. The Protuberances, in turn, command any number of Skaboolas, or "captains", who then maintain contain direct telepathic control over the rank and file drones. How much control or autonomy exists above the Skaboola level is currently unknown, but fear and reverence appears to be sufficient enough to maintain order regardless of how tightly the mental reins are held.

After Velociraptor's power signature draws an unidentified alien ship to Earth's solar system, the Great Skaboola reports the incident to the Grand Protuberance, cascading the news all the way to the top. Before long, Nick is summoned to appear before the Supreme Fu on the Grey home world. Exactly why has yet to be revealed, but no one assumes it is for a friendly introductory chat.