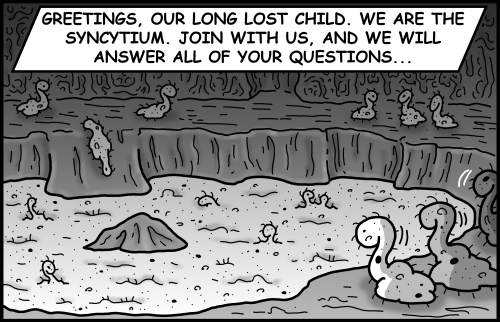 Volume: Varies depending on the number of Physarics currently joined

Weight: Varies depending on the number of Physarics currently joined

Cytoplasm: A swirling, prismatic, iridescent array of colors which varies as Physarics enter and exit

Distinguishing Characteristics: A "pool" of Physarics joined together to form a gigantic, multinucleated cell

To classify the Syncytium a "character" is a bit of a stretch, but it doesn't quite fit anywhere else either. Among the Physarics, a syncytium (note the lower-case) is any grouping of individual Physarics who have joined together into a giant, multinucleated cell. In this form, the individual Physarics become part of a greater whole, their distinct minds joining to form a collective telepathic "super-mind" with a combined intelligence greater than its constituent parts. Every Physaric "ship" and colony has its own syncytium, and syncytia may be formed anywhere and anytime they are needed, so long as there is a relatively stationary "pool" or "basin" into which the combined Physarics can collect. The Syncytium (capitalized) usually refers to the first, largest, and most powerful of the syncytia that resides on the Physaric home world and which acts as the governing body for the entire "empire". However, local syncytia may occasionally be referred to as "the Syncytium" when the context is apparent. (Note, however, that the Physarics are somewhat telepathic, so it can be sometimes difficult for non-Physarics to understand this distinction without such telepathic context.)

When an individual Physaric joins the pool, it ceases to be an individual and somehow becomes part of the whole. During this process, its consciousness becomes intermingled with the minds of the other members of the pool, and together they become a collective mind. The syncytium receives an exponential increase in intelligence and telepathic ability, giving it the ability to communicate over far greater distance than an individual alone. A telepathic network of syncytia forms the primary interstellar communication system for their entire civilization, allowing near instantaneous communication from one part of the "empire" to another. That said, an individual Physaric can leave the syncytium and still retain its distinctive traits, regardless of the amount of time it spends within the pool. How this "joined but separate" distinction is maintained is currently a mystery, and it is unlikely that non-Physaric species will ever be able to fully understand it.

While joined, a syncytium remains mostly stationary, most likely because its combined mass is contained within a single thin, fragile outer membrane. The combined multinucleated cell becomes lax and formless, resembling a viscous liquid. As such, it It cannot move under its own power, aside from random surface oscillations caused by the motion of Physarics joining and leaving the pool or reactions to outside forces. As such, syncytia are typically formed in a carefully chosen, well protected location free from as many external forces as possible. On planetary surfaces, they tend to be hidden in subterranean caves, far from weather and other geological phenomenon, as well as predators and other adversaries. On "star beast" ships, syncytia are usually buried deep within the creature's body in a region where the artificial gravity (or whatever facsimile the "star beast" uses) is stable and it is unlikely that external attacks can penetrate.

When Fred was brought aboard one of the Physaric ships during Scylla and Charybdis, he was brought before the ship's syncytium, which offered to share his origins and history with him if he joined them. Fred was reluctant, eventually revealing privately to Socrates that he was afraid of losing his individuality and that joining with the syncytium would turn him into a "puppet" like any non-Physaric. Fred also knew that joining the syncytium would given them the "cure" to "the Tainted", which Fred intended to withhold as a bargaining chip to help his human friends. When Scylla and Charybdis came to a close and a tentative truce was struck between the Greys and the Physarics, Fred elected to stay with the humans, stating that Earth was his home. Socrates decided to stay with Fred as well, but lied to the syncytium, stating that Fred's "cure" didn't work. Neither of them revealed the existence of Persephone to the syncytium; the three agreed that keeping her a secret kept the "cure" a secret as well.

Jeff acknowledges that the Syncytium is loosely based on the Great Link of the Founders of the Dominion from Star Trek: Deep Space Nine.

A syncytium or symplasm is the biological term for a multinucleated cell that can result from multiple cell fusions of uninuclear cells (i.e., cells with a single nucleus). Some species of terrestrial cellular slime molds may form syncytia, as can other protists, some plants and fungi, and some viruses. Skeletal and cardiac muscle also from a syncytium structure. Jeff chose the term "syncytium" for the "ruling body" of the Physarics specifically due to its association with slime molds.