Note: Due to technical limitations, this article's title has been changed from "thePR0PH3T" to "ThePR0PH3T". 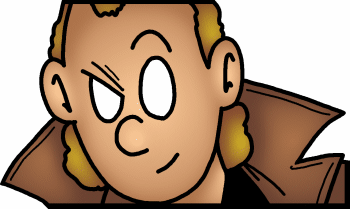 First Appearance: Harry Barker and the Chatroom of Enigmas (March 18, 2011)

Very little is known about "thePR0PH3T" other than the fact that he is a Caucasian male, perhaps in his late 30s or early 40s, who is balding and has a tendency to slouch and lean against things. He is best known, however, for being arguably the wisest and most even-tempered member of the Brotherhood of the Twisted Pair and has the unique distinction of being the discoverer of the prophecy of "the One".

When Scott chronicled the history of the Brotherhood to Patty and Tim, he described how "thePR0PH3T" analyzed the decades of Usenet posts made available when Google posted the entire Usenet archive online. During this analysis, he made a startling revelation: a prophecy hidden between the flame wars and the "me too" posts. One day a hacker would arise like none other, whose skills will be without equal. He (or she) will initiate a golden age of geekdom and lead a revolution of ideas that will transform the computerized world. The Brotherhood labeled this future "geek Messiah" as "the One" and quickly made it one of their primary objectives to locate this hacker and induct him into the Brotherhood. "thePR0PH3T" devised a series of tests based on the prophecy, which has been used by the Brotherhood to identify and test candidates for "the One" ever since. Although numerous candidates have been tested (most notably Fooker and Sharon), "thePR0PH3T" has not been directly involved in any of them.

When Scott and Tim eventually revealed to Fooker and Sharon their potentially candidacy, Fooker offered to solve the test's inconsistencies by analyzing "thePR0PH3T"'s code for bugs. Using Scott as a proxy, "thePR0PH3T" agreed, calling it an "honor" to have them debug his code. Fooker and Sharon subsequently discovered the bug and offered a suggestion to fix it. When the new analysis revealed that the last test should actually be two separate tests, Scott immediately latched onto this as further proof that either Fooker, Sharon, or their offspring may be "the One". Consequentially, due to Fooker and Sharon's involvement in updating the test, Greg and his faction of the Brotherhood would reject their modifications and cling to the original test, further widening the schism between the two factions.

We did not find out how "thePR0PH3T" felt about the change until some time later. Scott met with him outside a movie theater after (accidentally) sitting next to Fooker and Sharon. Scott began to have doubts about Fooker and Sharon's offspring being "the One", possibly because of the couple's refusal to have a child within a convenient time frame. "thePR0PH3T" revealed that he concurred with Scott's hypothesis, but his position as the finder of the prophecy made it difficult to support it openly. Technically he straddles the schism between the factions, giving him insight into both yet forcing him to remain neutral in their feud. He revealed that a "war is coming", and although he privately believed that Scott was in the right, he doubted that his faction would actually win.

"thePR0PH3T" would eventually resurface when Greg's faction began testing Yoshi has a candidate for "the One". During an argument with Greg, he reinforced his opinion that Fooker and Sharon's modifications to the test were not only valid but correct, and that Greg's refusal to accept those modifications made him closed-minded.

Note the handle "thePR0PH3T" is written as all one word, with "the" in all lowercase and "PR0PH3T" in uppercase letters. The "O" and "E" are substituted with a zero and a three respectively. Due to technical limitations set forth by MediaWiki, the title of this article begins with a capital "T" even though the "the" portion of the handle should be in all lowercase.

"thePR0PH3T"'s appearance is very loosely based on Pete Abrams, creator of the comic strip Sluggy Freelance. Pete himself made an unofficial, unidentified cameo in the April 7, 2002 strip, although this appearance should not be confused with "thePR0PH3T", who is a separate character.