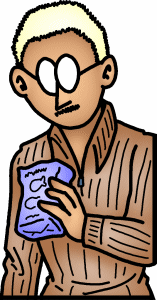 Tim is a developer and currently an employee of GPF Software. Dwayne brought him in as a contractor during an expansion of new work and he eventually became a full-time employee. He now serves as one of the company's junior developers.

Tim is the last "One Zero" or second in command of the elite secret society of hackers known as the Brotherhood of the Twisted Pair. He was an acolyte when Fooker was tested for membership and "One Zero" when Sharon received her test. Although not nearly as fanatical as his friend and superior Scott, he too is active in the search for "the One", the fabled geek Messiah who will lead all of geekdom into a future age of technological enlightenment. Tim's employment at GPF allows him to can keep close tabs on the couple Scott believes will one day give birth to "the One". It has also been revealed that Tim is secretly in love with one of the pair, although for a long time it was uncertain which that might be. This led Patty to imply to Fooker that Tim might be gay, although that misunderstanding was eventually rectified.

While not an avid gamer, Tim is a fan of Bog of Bloodbath, a MMORPG. He plays a level 25 wizard, mostly on the "Nethermoor" game server or "dominion". He became briefly trapped within Bog of Bloodbath with Dexter and Patty when Dex convinced the pair to use the MUTEX to turn the game into a virtual reality experience. Dex absentmindedly forgot the escape remote, trapping the trio in the game until Nick and Ki arrived to rescue them.

In Sharon's dream world of Harry Barker, Tim apparently fills the role of Albus Dumbledore from Harry Potter. He is headmaster of Hollerith's School of Phreaking and Hacking and sports a long flowing beard (but the same blond hair and black mustache). In the dream, his last name is "Dumpingcore", although it is unknown whether or not this is his true name; that seems unlikely and it is more probable to be a mesh of the Dumbledore character from Potter and the fact that Sharon doesn't know Tim's real last name.