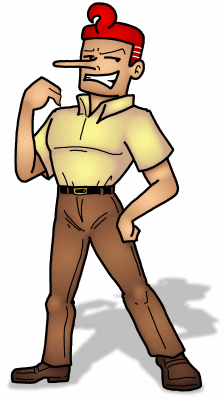 A "no good, vile, back-stabbing son of a...." Such is how GPF Software's former marketing guru Trudy described her one time fiancé turned bitter rival, Trent. And it's probably a pretty good description, too. Devious, crafty, malicious, and cruel, Trent is just as diabolical and scheming as his former lover. In fact, you could say they were made for each other... if they hadn't both planned to betray one another eventually anyway....

Everyone was surprised with this little blast from Trudy's past, including me. Trudy's old college boyfriend, Trent, resurfaced when he became obsessed with framing Trudy for a rash of incidents where someone was dropping safes on the heads of small software companies. (Actually, Trudy was responsible for all except for the attempt on Dwayne's life, which Trent framed her for!) Trent's plans were foiled by Nick and Fooker and he spent the next couple years rotting in jail until a fortunate bus accident freed him, Fooker, and Dwayne and sent them on the lam. Eventually, Trent proved to be a somewhat useful ally in the Battle of Manhattan (see Surreptitious Machinations, Chapter 8: Wars and Confrontations). He then joined GPF Software as Trudy's replacement, perhaps a more fitting revenge against his old rival than any other.

Where Trudy was manipulative and controlling, Trent is more ruthless and underhanded. Trudy would rather pit competitors against each other and have them eliminate themselves, whereas Trent would prefer to attack them on both fronts and discredit them publicly. Trent is a sadistic negotiator, and if you ask him to get you more money on a contract, he'll probably end up getting you their first born child as well. But don't let this sly schemer fool you; in truth, he is an absolute coward in physical confrontations. He who fights and runs way lives to fight another day.

We is uncertain why Trent was so intent on helping GPF Software rebuild itself after being torn apart by Trudy's schemes. Perhaps he wanted to undo his predecessor's handiwork, but most likely he had his own designs on the small company. However, Trudy's former coworkers wouldn't let another evil partner go unchecked. After a long and nasty confrontation with Fred the Slime Mold which resulted in a messy libel lawsuit, Trent was ultimately fired from GPF and left with a number of pending criminal investigations nipping at his heels. Trent's current status is largely unknown, but it's highly likely he'll be spending a lot of his time at the county courthouse for the foreseeable future.

In Sharon's dream world of Harry Barker, Trent is the analog of Vernon Dursley from Harry Potter. He has undoubtedly overcome his past with Trudy and the two are now married, living out their lives as free from dreaded technology as possible. Sadly, like his "Negaverse" counterpart, he doesn't get to keep all of his fabulous hair. They have a son, Travis, and are the reluctant guardians of Sharon and Fooker's orphaned son, Harry. Little do they know of their young ward's potential, however....