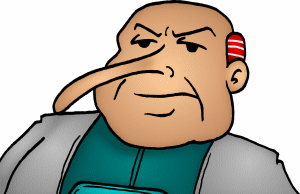 During To Thine Own Self..., when the rescue squad crossed into the "negaverse" in search of Nick, Trudy's counterpart briefly introduced the various members of the resistance against Emperor Nicholas the Puissant. To everyone's surprise (and Trudy's horror), she revealed that this universe's analog of Trent Terrell was not only the leader of several resistance cells but "the bravest man [she had] ever met". "Nega" Trudy and "Nega" Trent remained deeply in love, a fact that sent "our" Trudy gagging to keep her lunch down.

"Nega" Trent organized the raid on the Emperor's palace, splitting the forces between the primary rescue squad made up of Nick's friends from "our" universe and a diversionary squad made up on resistance fighters from the "negaverse". Unfortunately, not long after the raid commenced, the Emperor's stormtroopers stormed the resistance headquarters, killing Trent and neutralizing the base.