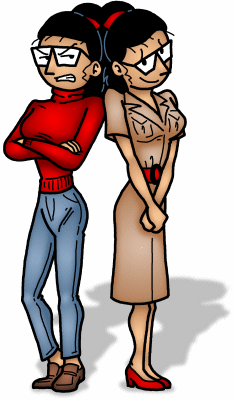 Describing Trish Marshall is complicated, primarily because of the fact that she exists as two separate individuals from two distinct parallel universes. However, because the history of these two women within the comic is so tightly interwoven, it makes the most sense to discuss them together in a single entry, rather than separating them.

Trish first came onto the scene as the head of I/T for Goodman Rubber, one of GPF Software's clients. However, in an almost strip-for-strip repeat of the happenings with Trudy during "The Date", Trish made romantic moves on Nick, which Ki promptly thwarted. The mystery deepened months later when Trish resurfaced and apparently had no memories of the previous event. Ki and Sharon investigated, only to miss the revelation that there were actually two Trishes, and neither one appeared too happy to learn of the other's existence. "Bad" Trish shot "Good" Trish, quickly disposed of the body, and then later appeared to the rest of the gang claiming she suffered from schizophrenia. We eventually learned she was also in the employ of a mysterious cloaked figure, who undoubtedly had some nefarious plan in store for the rest of the crew....

It was during To Thine Own Self... that the identity of the mysterious cloaked figure was revealed. It was none other than Emperor Nicholas the Puissant, Nick's counterpart from an alternate universe. "Bad" Trish (or "Nega" Trish as the Faulties tended to call her) was his advance spy, using the crippled interdimensional capabilities of the Emperor's version of the MUTEX to gather surveillance on the GPF crew. When Trish ultimately bungled the task, she was recalled and summarily executed for her failure. Since the GPF gang simply saw her vanish into thin air with no further explanation, her ultimate fate technically remains a mystery to them.

Over time, a great deal of speculation rose among Faulties that "Good" Trish was still alive and was the mysterious injured figure treated by Dr. Akhilesh Sehgal during the final week of "Homecoming". Police brought in a naked, unconscious woman, an apparent victim of a shooting, to the hospital where Dr. Sehgal worked. Although she had lost a lot of blood, the bullet wound seemed cauterized and her hair, facial features, and even her fingerprints began to shift and change. Dr. Sehgal eventually discovered that tiny nanoprobes were attempting to disassemble her body at the cellular level. Sehgal eventually developed a "cure", halting the progress of the nanoprobes, and applied an experimental gene therapy to restore her damaged DNA. Trish's signature trapezoidal glasses seemed to be seen shattered and lying on a table next to the patient's bedside.

Some time later, a group from GPF Software made their way to another city to attend a technology expo. When Dexter suffered a heart attack, the other members of the team rushed him to the hospital. While there, Ki and Trudy ran into none other than Trish, very much alive and walking down the hall with an IV pole in tow. Trish tried to explain how Dr. Sehgal had been treating her for a very long time, but that her condition "sounded like something out of science fiction". She was suffering from amnesia to the point that she no longer even remembered her name. Although distracted by Dexter's and Patty's injuries, Ki promised to eventually fill in the details of what she knew of Trish's past. After she did so (with a little bit of help from a "friend with connections"), Trish was hired by Dwayne and now works at GPF Software as an analyst.

Trish as come to develop a "frenemy" relationship with Patty, which was compounded by the fact that Patty encountered "Bad Trish" from the Negaverse first. The two first met when "Bad Trish" crashed Patty's blind date with Dexter. "Bad Trish's" aggressiveness immediately put Patty on edge, and the two feuded for Dexter's attention the entire evening. At Nick and Ki's wedding rehearsal dinner, Patty quickly became suspicious of Trish's "schizophrenia" while most of the others had come to accept it as fact. When Trish vanished, Patty was drafted to become one of Ki's bridesmaids since Lori was unavailable. Years later, when "Good Trish" came to work at GPF, she and Patty bumped into each other. Unaware that the two "Trishes" were different individuals from alternate universes, Patty was instantly hostile toward her. This friction remained until Dwayne forced them to work on a project together. Trish eventually managed to convince Patty she had no prior memory of her, which Patty took as amnesia from Trish's long hospital stay. The two eventually became semi-friendly acquaintances, even attending a Renaissance fair together.

Trish played a minor but important part during Scylla and Charybdis. As Fred's biggest fan, she managed to convince him to let her accompany him, Patty, and Dexter as the trio went to confront Fred's long-time "stalker", Socrates. When Persephone was found to have stowed away on the trip, she and Trish instantly became "BFFs". The group quickly discovered that Socrates was a "slime mold" like Fred, and that the two were actually aliens. After Socrates revealed Fred's origins and how the pair came to Earth, the group was knocked unconscious and taken aboard one of the alien vessels. It was there they encountered Colonel Lionel Barker, who revealed his convoluted plan to "protect" Earth from alien invasion by helping the aliens take over the planet. Trapped with no means of escape, the group eventually made contact with their friends aboard one of the Grey ships and relayed what they knew of the conflict. After the standoff dissolved with Nick "destroying" the Earth, Trish decided to keep a journal of the events, fearing it "could be the last written record of the human race." With the rest of the human "survivors", Trish is now helping to search for the missing Earth so it can be returned to its home universe.