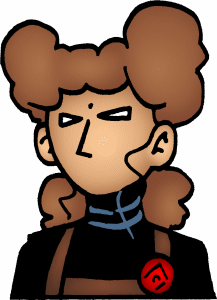 In the alternate universe portrayed in To Thine Own Self..., many familiar faces have "mirror" counterparts with similar yet startling different traits. None are as tellingly different as Trudy Trueheart's double, a heroic yet reluctant freedom fighter valiantly fighting for liberty and justice against a despotic, totalitarian regime. Quite a departure from the woman who nearly conquered her own world, isn't it?

"Nega-Trudy", as some fans have dubbed her, is physically identical to our Trudy in every possible way. It is her morals and temperament that set her apart. She is loyal, kind, and selfless; when given the opportunity to escape the horrors of her own world to start a new life in our heroes' universe, she sacrifices her future to give our Trudy the same chance. She is deeply in love with her universe's version of Trent Terrell and her courage and resolve form the core of the resistance against Emperor Nicholas the Puissant.

Like our Trudy, her counterpart enters the drama when she is hired by Dwayne Duncan to be the marketing director of GPF Software. "The only honest one of the bunch", she is hounded by the cruel Jason Barker and Ki Oshiro until she is befriended by Nick Wellington, who is kind, helpful, and stands up for her when the others are mean to her. Sadly, this is all a "web of deceit" orchestrated by Wellington to use her for unspecified future ends. When Wellington and Oshiro take control of the world's financial markets, Trueheart finally sees Nick for what he truly is and vows to stop him. She joins a resistance movement called C.R.U.D.E. and, because of her familiarity with the Emperor and his chiefs of staff, quickly gains a "level of importance". When one of the rebels' operatives comes across the Emperor's surveillance of our heroes across dimensions, Trueheart realizes the implications and uses Yoshi's MUTEX/Velociraptor clone (the plans for which were given to him by our Trudy years before) to cross over to our universe and contact them and enlist their aid.

Once back in her universe, Trueheart leads Nick's friends and a squad of U.G.A. agents on a rescue mission deep into the Emperor's palace. "Nega-Trudy" takes a team of rebels in one direction as a diversionary tactic while Trudy and Nick's friends attempt to find and rescue Nick. Eventually, after several misadventures, both teams are captured and brought to the Emperor's throne room, with "Nega-Trudy" supposedly defeated and Chuck Walker serving as a double agent in the Emperor's employ. When the tables are turned and the rebels begin to fight back, "Nega-Trudy" and Chuck reveal their true plan: Chuck is really a triple agent and Trudy's capture was a ruse to get them into the throne room. The heroes subjugate the Emperor's forces only to have their victory be a Pyrrhic one as the otherworldly enemies of the Grey Aliens begin their invasion of Earth.

During the battle, "Nega-Trudy" is knocked unconscious by an alien walker. As she regains consciousness, a subsequent explosion knocks our Trudy out, knocking loose the small pin used as a visual aid to tell the two apart. "Nega-Trudy" grabs the pin and convinces our heroes that she is their Trudy and that their Trudy is really her. She talks Ki into taking Trudy back with her and having the U.G.A. give her a new identity and life. As our heroes escape and the palace begins to crumble around them, "Nega-Trudy" and Chuck escape in the Emperor's personal shuttle, presumably reaching safety. While their ultimate fate is unknown, it is possible that they are now working to restructure the remnants of the Empire and rebellion into a new resistance against the on-going alien invasion.