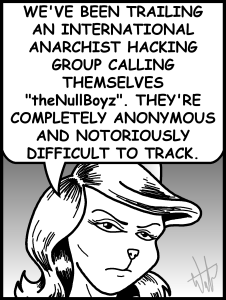 When Victor Brown sabotaged Velociraptor, he stranded Fooker, Sharon, Trudy, and Stewart Johnson in a parallel universe where they were all transformed into anthropomorphic "furry" animals. After the Gamester convinced D.C. Smythe to take the "cosmic refugees" under his wing, the British agent brought the group back to a temporary I.G.N.I.T.E. field office and introduced the group to his associate and frequent partner, Valerie Smith.

Valerie is a career CIA field agent, although she originally started out as an analyst and professional hacker. Born in San Francisco, California, USA, she was the youngest sibling to three older brothers. Her father was a career U.S. Army officer until his death during a covert mission, and all of his children followed him into government service. Rather than pursing a career in the military like her brothers, the relatively nerdy Valerie earned her masters degree in computer science and joined the CIA as an analyst, routinely hacking foreign nations' systems. She was reluctantly pressed into field work when a mission came up and no other female agents were available. She found the mission an exciting change from her desk-bound duties and volunteered to continue in the field. Eventually, she was placed "on loan" with the international anti-terrorist coalition I.G.N.I.T.E., where she was paired with SIS agent D.C. Smythe.

Beyond her vast computer skills, Valerie is a master of several martial arts, some of which she competed in when she was younger. She took up the practice in part to hold her own against her rowdy brothers, but later found these skills incredibly useful in the field. What she lacks in size and strength she more than makes up for in speed and agility, allowing her to hold her own against much larger opponents such as Joe T. or Al E. Gator. She is incredibly intelligent and at times comes across as a bit of a "know it all", but she has come to depend on Smythe's years of experience to temper her relatively lack thereof.

Smith played a pivotal role in connecting the "theNullBoyz" hacks to the mysterious "shadowCoin" cryptocurrency, thus leading to the link between both and the criminal mastermind Doctor Shadow. She was part of the team that tried to infiltrate Shadow's underground lair. While Shadow and minions eventually escaped, she, Fooker, and Sharon were able to dismantle "shadowCoin" and save the world's financial systems from collapse. She appears to have a passing knowledge about the existence of the Gamester, calling him Smythe's "cosmic jester friend".

Valerie started in Jeff's high school D.C. Smythe comics as a brief secondary co-star and potential love interest for Smythe in a series of stories from 1990. When Jeff later decided to retool the Smythe premise, he replaced Smythe's original assistant (a bungling male mouse mostly intended for comic relief) with Smith, in an effort to broaden the diversity of the cast and change the dynamic between Smythe and his partner. Valerie is a central figure within Jeff's overall "multiverse", and the Smythe series likely would have been his first published project if GPF hadn't accidentally come into existence.

Many of the D.C. Smythe characters, including Smith, have been regular fodder for the Jeff's Sketchbook feature of GPF Premium. Sketches prior to Smith's appearance in the strip usually contain the descriptive but boring pseudonym "cat girl" in the title (although there may be other Sketches in the archive with those words that don't relate to her).