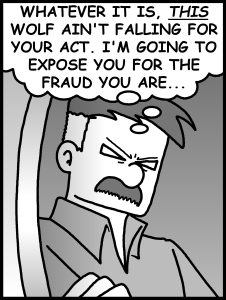 Marital Status: Uncertain; possibly married, given his speech about families

Following the events of Scylla and Charybdis, Nick called an "all-hands meeting" among the human "survivors" to seek out volunteers to help in the search for the missing planet Earth. While the reception to the event was cool overall, one detractor in particular stood out. Victor Brown, a salesman for a petroleum company and former Physaric "puppet", publicly heckled Nick, explicitly calling him a murderer for "destroying" the planet. Although Fooker stood up for Nick and countered his arguments, Brown was not convinced. Storming out of the assembly, Brown offered a thinly veiled threat that he might shove Nick out of the nearest airlock given the opportunity.

To date, we still do not know much about Brown and his motives. It is apparent that his anger toward Nick stems from a possible perceived loss of his family and is a strong indicator that not all of the human "refugees" on the Grey ship accept Nick's explanation for what happened. Brown seems determined—if not obsessed—with exposing Nick as a "fraud", to the point of sabotaging Velociraptor. Where his feud with Nick will eventually end is anyone's guess, but at least Nick has "bodyguards" to look out for him.